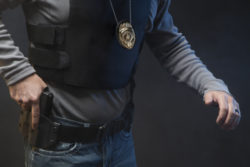 The U.S. Bureau of Labor Statistics reports that police officers bear higher risks of work-related injuries and illnesses than people in other occupations:

New Jersey law offers a range of protections when a security worker or police officer is killed or becomes injured when performing his or her job. An experienced New Jersey workplace injury attorney can help the injured officer or family to best understand their legal options.

Security workers and police officers work each day to make our streets safer. While performing his or her job, the worker faces many possible hazards. According to “The Police Chief,” officers face the following risks on the job:

While police officers, sheriff’s patrol officers, or security workers understand they’re exposed to higher on-the-job injury risks, it’s extremely difficult to prepare for many workplace injuries or death. New Jersey law ensures that law enforcement officers injured in the line of duty have resources to meet their financial needs, including: