This panel followed the play A Good Farmer which examined issues surrounding immigration. It debuted at the South Orange Performing Arts Center (SOPAC) and was performed by the American Theater Group.

Noriega helped take a closer look at the topics the play raised by moderating a post-show discussion: 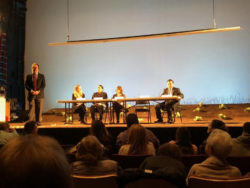 Michael Noriega knows, as do most attorneys, that there is power in storytelling. But sometimes, he says, to make people understand a larger issue, you need to do more than tell one person’s tale. And that’s where the arts can make a difference.

This was his hope for Sharyn Rothstein’s play, A Good Farmer, as it highlighted issues surrounding immigration during its debut at SOPAC on Jan. 28, 2018 featuring the performers at American Theater Group. After the performance, Noriega helped take a closer look at the topics the play raised by moderating a post-show discussion titled The Immigrant Experience: Escaping the Shadows.

The play tells the story of a farm owner and her Mexican farmhand whose makeshift family is threatened when the farmhand’s legal status is questioned. In light of debates over immigration policy that have been taking place in the United States over the past year, Noriega said, the topics explored in the play became even more relevant.

Noriega is chair-elect of the NJSBA Immigration Law Section and practices with Bramnick, Rodriguez, Grabas, Arnold & Mangan in Scotch Plains. He is also a father of four, including an eight-year-old budding actress. Through his daughter’s director, he came to know Jim Vagias, the producer of A Good Farmer.

On Jan. 28, he lined up a panel that included Assemblywoman Annette Quijano; DREAMer and youth organizer Sara Mora from Make-the-Road New Jersey; Jenna Pannepacker, the co-founder of the Sanar Wellness Institute, which provides services to survivors of human trafficking; and a senior staff attorney from the American Civil Liberties Union of New Jersey.

Noriega, whose office has been besieged by callers looking for advice in the face of changing immigration policy, moderated the discussion in hopes that the event would help the public better understand the complexities and implications of immigration law.

“More than anything else, what I’ve been shocked by is the lack of understanding of immigration law,” Noriega said. “People assume that there are 13 million people that just don’t feel like getting their paperwork straightened out…that are just lazy, or just don’t understand, or just don’t want to…It’s just wrong….The vast majority are people that are trying to plant their roots in this country.”

“It became a passion project for me to try to get people to come see this,” he said. “When you tell (people) a sad story, they think of it as a unique, isolated situation. But if they can see a little bit of their lives, and a little bit of people that they know in the story…I think it carries much more weight. If they get to see it with their own eyes from beginning to end, and how it impacts multiple people, I think it has a greater impact on them.”

Whether your case is a complex immigration or a fairly straight-forward Green Card or visa application, you can rely on Michael Noriega for focused, experienced legal representation. He has dedicated his practice to assisting clients with legal matters throughout Northern New Jersey. He has argued many times on behalf of his clients in the local immigration courts and the Board of Immigration Appeals.

If you or someone you know are in need of assistance with an immigration matter, please contact attorney Michael Noriega today: