Differences Between Robbery, Theft and Burglary

Robbery, Burglary and Theft, Oh My!

It’s not uncommon for people to use the terms theft, robbery and burglary interchangeably. After all, they all constitute taking property that doesn’t belong to you, right? While the basis of that may be true, these terms have major legal distinctions and consequences should you be convicted of one. Read on further to learn what they are. 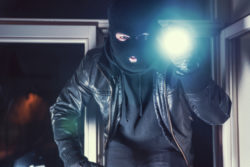 The crime of theft simply involves the taking of someone else’s property without their consent, and with the intention of permanently depriving them of it. Theft involves a variety of conduct that may involve physical items, property, or even services. There are even provisions of the law which allow for a conviction of theft when a person is merely in possession of something that was stolen- even if they did not steal it.

Robbery is one of the most serious crimes in New Jersey. It is treated more seriously than a simple theft offense, and it requires additional proof. A robbery is a combination of a theft and using any kind of force against the person to accomplish the theft. The range of cases that fall within the definition of robbery can be surprising; from bumping the security guard to getting away after shoplifting a piece of candy; to a theft of money from a gas station while pointing a gun; both offenses are considered robberies and carry years in prison as will be seen below.

How Burglary is Different

Burglary is different from both robbery and theft because it involves breaking and entering a dwelling or structure with the intention to commit a crime. This can involve any crime, not just theft. Even if no property is taken, the breaking and entering with the intent to commit any crime, such as an assault, criminal mischief, damage to property, can all form the basis for a burglary charge.

Usually, the crime that the burglar intends to commit when illegally entering the building is some sort of felony, but it may occasionally be a misdemeanor. The defendant must also forcefully enter the building, but even lifting a window that’s not locked can qualify as force, making the crime a burglary.

If you were arrested or charged with robbery, theft, or burglary in New Jersey, the consequences of a conviction could be severe, jeopardizing your future reputation and even your freedom. The law firm of Bramnick, Rodriguez, Grabas, Arnold & Mangan, LLC is based in Scotch Plains, New Jersey, but we also serve Elizabeth, Union, Plainfield, Newark, East Orange, Irvington, Edison, Woodbridge, Old Bridge, Piscataway, New Brunswick, Perth Amboy, Paterson, Clifton, Passaic, and Wayne. Call us at (908) 325-5571 or fill out our online contact form. Our main office is located at 1827 E 2nd St, Scotch Plains, NJ 07076, and we also have offices in Westfield, Newark, Cherry Hill, Clifton, Elizabeth and East Brunswick, NJ.