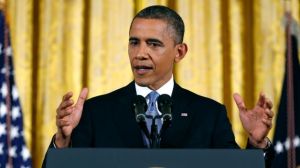 President Obama is expected to speak to the American public live tonight about his position on immigration reform. At press time, officials said the president plans to announce he will use his executive power to protect nearly five million undocumented immigrants in the United States. If indeed he makes these expected announcements and does carry through on his widely discussed plan to provide many immigrants with a legal path to stay and work legally in the US, his actions will effectively lift the fear of deportation from the shoulders of millions of undocumented immigrants.

Immigration law is complex. All undocumented individuals are invited to contact Michael Noriega of the Jon Bramnick Law Firm. Mr. Noriega has helped countless families who are facing immigration issues including deportation, Green Card or visa denial and many other serious issues.

If you or someone you love needs legal assistance to help stay in New Jersey, talk with attorney Michael Noriega right away. He has dedicated his practice to assisting clients with legal matters around the issue of immigration. In fact, Mr. Noriega’s practice has taken him to the Supreme Court of New Jersey twice over the past two years.

During his live televised speech today, Nov. 20, 2014, at approximately 8 p.m., President Obama is expected to announce he intends to use his executive power to take action on immigration reform, despite major Republican opposition to his proposed immigration legislation. Democratic supporters are praising the president.

Some specifics to note about President Obama’s expected announcement:

The president will be able to exercise prosecutorial discretion to prevent breaking up families of children entitled to remain in the country. This will allow enforcement agents to focus on deporting criminals who pose a threat to our national security.

However, some White House officials have argued that it will be more difficult to protect parents of immigrants who came to the country as children, through the Deferred Action for Childhood Arrivals program. These young people have deportation deferrals and work permits but no formal immigration status. It is believed that their parents’ claim for relief will be harder to grant.

If you or someone you know is concerned about how this new potential legislation may affect you, call Michael Noriega today. Mr. Noriega decided to practice immigration and criminal law because he has witnessed over the past several years a serious need among residents of New Jersey to have knowledgeable and experienced representation in these two areas of law.

As immigration reform begins to sweep the nation, Mr. Noriega is committed to assisting his clients so that they can benefit from the change rather than agonize over its complexities. He handles many types of cases including:

We invite you to contact him to discuss your personal immigration or criminal defense needs. Mr. Noriega speaks Spanish fluently.

Whether your case is a complex immigration or criminal matter or a fairly straight-forward Green Card or visa application, you can rely on Michael Noriega for focused, experienced legal representation. He has dedicated his practice to assisting clients with legal matters throughout New Jersey.