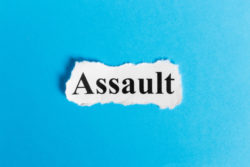 Assault is a serious criminal charge, with potentially serious consequences. Here is a brief guide to the New Jersey laws on assault, and the possible defenses to these charges.

In New Jersey, there are two categories that classify assaults. The first one is simple assault, and the more serious charge is known as aggravated assault.

A simple assault in New Jersey is when an individual attempts to cause, or knowingly or recklessly causes bodily injury to another person. This also includes negligent behavior that causes bodily injury with a deadly weapon (gun, knife, etc.) Violent threats can also be charged as an assault. A simple assault is charged as a disorderly persons offense, also known as a misdemeanor. Possible punishment if convicted can be up to 6 months in jail and/or a up to $1,000 fine.

When it comes to mutual fights, you can still be charged under the simple assault protocol. However, this is charged one tier lower than the above behaviors as a petty disorderly persons offense. This is also a misdemeanor that can put you in jail for up to 30 days.

The more serious version of assault in New Jersey is classified as aggravated assault. There are a number of behaviors that can elevate a simple assault charge to an aggravated one under New Jersey law. These include

One last note is that if an assault is made on a first responder like a police officer or firefighter, an assault is automatically bumped up to an aggravated designation. The same goes for assaults with vehicles.

An assault charge is a serious legal matter that can cause you to acquire a permanent criminal record, be forced to pay fines, and even spend serious time in prison. When it comes to taking on an assault charge, there are some commonly used defenses that you can use to reduce or even get the charges dismissed.

Were you arrested or charged with assault in New Jersey? The consequences of a conviction could be severe, leaving you with a permanent criminal record and possibly even sending you to jail. That is why you need to speak with a qualified criminal defense attorney as soon as possible about your case. The skilled attorneys at Bramnick, Rodriguez, Grabas, Arnold & Mangan, LLC represent clients charged with assault all throughout New Jersey. Call 877-423-4878 or fill out our online contact form to schedule a free consultation about your case. We have several offices, conveniently located in Scotch Plains, Westfield, Morristown, East Brunswick, Clifton, Cherry Hill, and Newark, New Jersey.